The FootStock Casino doesn’t involve money. It involves your players!

That’s right, the players that you earn from challenges, obtain from Player Packs or purchase from the stock market are the currency that’s used in the Casino.

what game can i play at the casino?

As mentioned above, there will only be a single game at launch. This is called ROULETTE.

This is a game which works very much-so like Top Trumps, where your player has rating points & if your points outweigh your opponents, you win.

The FootStock version of this game will be using Real-Time Data, meaning that it uses real life form.

how exactly does it work (detailed)?

Let’s go right from the start.

You have a player which you want to take to the Roulette game, in this example it’s going to be Harry Kane.

Harry Kane is a 4* card, which puts him as an Epic Player. He can be matched against any card on the platform which plays in the same position (FORWARD).

You have now taken Harry Kane to the Casino, where it then finds you an opponent card to battle.

In this example, the opponent card to battle will be Marcus Rashford. (I am making up the figures below also for this example).

A Random stat will then be chosen from the list of data. This could be Pass completed, touches, goals, and so on.

In this example, we have chosen TOUCHES.

It will then build up the tension by showing the score for your players TOUCHES, followed by Marcus Rashford touches.

Your prize for winning this challenge will be Marcus Rashford’s Player Card.

Why is it called roulette?

I’ll be honest, this doesn’t bare much resemblance to Roulette at all.

I think it’s called Roulette because the system ‘spins’ a randomly generated stat at you, to battle your opponent with. It may be worth finding out from Till why he chose Roulette as the name.

I don’t really mind what it’s called, it does seem to be a great game, so far.

You don’t use actual cash, so there’s no way to get sucked into it and use your hard earned money, which is a great move from FootStock. 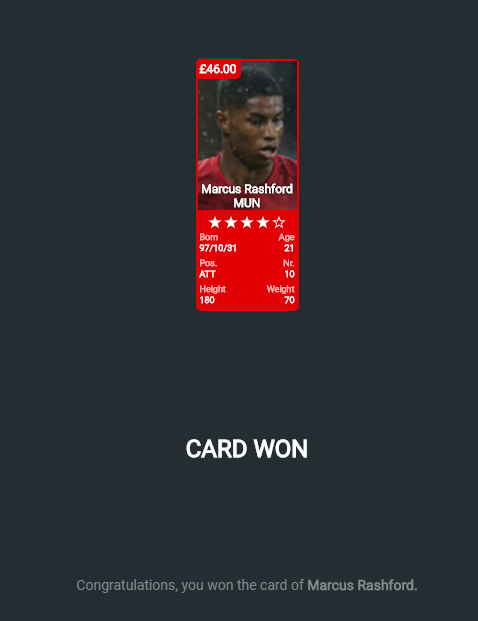 Contact [email protected] for any enquiries. Here to assist you with Footstock.